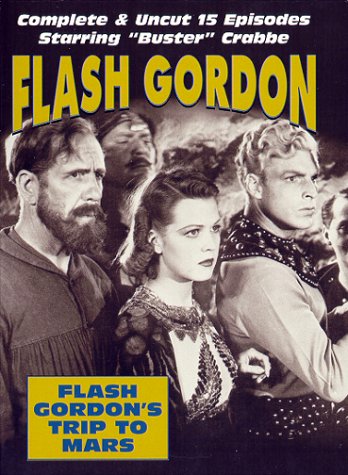 Complete and uncut: 15 episodes starring "Buster" Crabbe. Life on Earth is about to be destroyed! A mysterious beam of light emanating from Mars is sucking the nitrogen from the planet’s atmosphere, and only Flash Gordon ("Buster" Crabbe) can stop it. Blasting off with Dale Arden (Jean Rogers) and Dr. Hans Zarkov (Frank Shannon), Flash and his intrepid band of adventurers quickly learn that Queen Azura (Beatrice Roberts), ruler of Mars, is stealing Earth’s nitrogen to aid in her ongoing war with the Clay People, Martians whom Azura magically turned into living mud. A bigger surprise, however, is yet to come; working closely with the Queen is Flash’s mortal enemy, Ming the Merciless (Charles Middleton), who–while posing as Azura’s ally–is secretly plotting to overthrow the Queen and seize Mars for himself! Can Flash save the Earth, rescue the Clay People, bring Azura to her senses, and stop Ming’s heinous scheme? The answers lie in "Flash Gordon’s Trip to Mars"–15 thrilling episodes of sci-fi adventure at its very best.