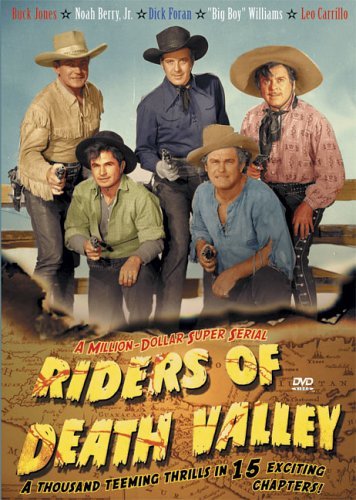 Promoted and advertised as "The Million Dollar Serial", most of which appears to have been spent on advertising and the most elaborate pressbook ever put out by Universal on a serial (or 95% of their feature films for that matter), Universal’s 51st sound-era serial (following "Sky Raiders" and before "Sea Raiders" and, to quote the late Oliver Drake who wrote the original story,…"we were lucky they didn’t call it ‘Land Raiders’), "Riders of Death Valley" remains a favorite for the 7-12 year-old kids who saw in on original release in 1941, and a major disappointment for those who came later and never saw it in the 35mm version shown on a screen in a 350-seat grind-house theatre, and now question what all the excitement was about. Hey, you had to have been there. Actually, it is just one long prolonged chase after another for the most part and, even worse, it is usually the 5-6 good guys running from 2-3 of the bad guys (which even had eight-year-old kids of 1941 wondering what’s up)…