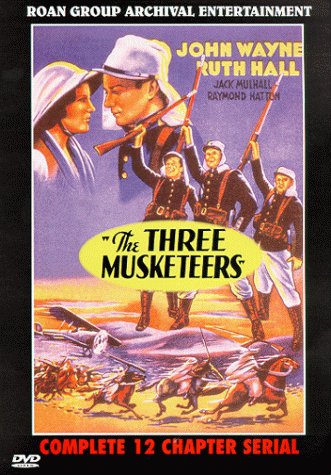 American aviator Tom Wayne (John Wayne)and his co-pilot, Stubbs (Noah Beery Jr.)are flying over an African desert when they see trouble below…Arab bandits are attacking three troopers of the French Foreign Legion. Using the machine gun mounted on his airplane, Wayne quickly stops the Arab attack. The rescued Legionaires—Clancy (Jack Mulhall), Renard (Raymond Hatton) and Dutch Schmidt (Francis X. Bushman Jr.)introduce themselves as "The Three Musketeers." They inform Wayne that the attackers were followers of "The Devil’s Circle," a fanatic cult out to destroy the Foreign Legion by gun-running and insurrection. The cult’s leader is El Shaitan, a masked man whose real identity is known to none. Wayne is drawn into the fight through the encouragement of his new friends, and a call for help from an old friend, Armand Corday (Lon Chaney Jr.), who has been duped into The Devil’s Circle, but is trying to break away. But Armand, is killed by an assassin before he can tell what he knows …